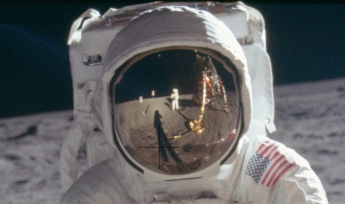 Today we pause from our ‘Saturdays in the Psalms’ series to remember a world-changing event. Fifty years ago, Astronauts Neil Armstrong and Buzz Aldrin were the first people to walk on the moon. This was a hallmark achievement for the USA, and all of humanity, since the space program ushered in many of the technological advancements we enjoy in our daily lives. I’m sure we all remember Armstrong’s words — “That’s one small step for man; one giant leap for mankind.” — and marvel at that momentous achievement as the world watched in amazement.

I was not around for the moon landing, though it is something that has fascinated me for most of my life. I went through a significant phase where I wanted to be a pilot and hoped to be accepted as an astronaut. I got scared by the advanced math, and near that same time, I received my call to ministry. As it became clear that I would not leave this planet by rocket, I found a relationship right here on Earth that is out of this world!

You are probably aware of Armstrong and Aldrin’s mission where they walked, planted an American flag, and collected rocks from the lunar surface. Something else took place on the moon that isn’t as widely known, but it forever transformed the meaning of remembering what took place on that day fifty years ago. You see, today is also known as Lunar Communion Day. That’s right…Holy Communion was celebrated on the moon, fifty years ago today.

Once the Eagle module landed at Tranquility Base on the moon, Armstrong and 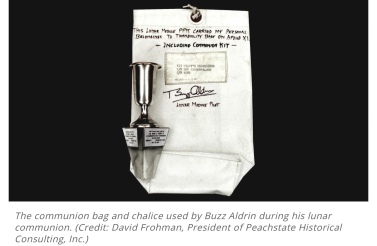 Aldrin had to wait before they descended the ladder for this ascendant event. During that pause in their mission, Buzz Aldrin pulled a small portion of wine and a morsel of bread for which he received permission to take to space with him, and celebrated the Great Thanksgiving on the moon. Armstrong watched on, but did not participate. Aldrin later wondered if he did the right thing, so as not to offend non-Christians. Even NASA opted to keep the celebration of Communion on the down-low, fearing lawsuits from those in opposition to Christian expression. Still, with all the apprehension and potential blow-back, Aldrin proceeded to do what Jesus commanded all those years ago: “The Lord Jesus, on the night he was betrayed, took bread, and when he had given thanks, he broke it and said, ‘This is my body, which is for you; do this in remembrance of me.’In the same way, after supper he took the cup, saying, ‘This cup is the new covenant in my blood; do this, whenever you drink it, in remembrance of me.’For whenever you eat this bread and drink this cup, you proclaim the Lord’s death until he comes” (1 Corinthians 11:23-26, NIV).

Buzz Aldrin reflected how amazing it was to him that the first thing served and consumed on the moon was the bread and wine of Holy Communion. This was important for Aldrin, because he knew Christ was with him up to that life-altering event, and would be with him the rest of the way. Knowing he had communion with Christ prodded him to celebrate the Communion of Christ.

I think it’s fitting that Aldrin looked up to God before he went down the ladder, because the Lord was with him as he walked on the moon. The very One who created the moon to be a light in the night (Genesis 1:16) was celebrated as the Light of the World, even 248,543 miles away from his terrestrial home.

I am quite sure that you will take many steps today, but doubtfully as significant as what took place fifty years ago tonight. Still, that doesn’t mean that what you do today will lack impact or meaning…quite the contrary! For whenever you seek first to commune with Christ before whatever it is you do, you guarantee that He is right there with you. So, whatever you do, use your life light to point others to the goodness of God (Matthew 5:16).

May your steps be blessed on this fiftieth anniversary of Lunar Communion Day. And as the world commemorates that giant leap made for mankind, may we remember that we are made by God, and for God; so may we do everything to honor God and walk in His steps, wherever we go.

“For we are His workmanship, created in Christ Jesus for good works,
which God prepared beforehand that we should walk in them.”
(Ephesians 2:10, NKJV)

Prayer: Dear Lord, though I might not do something as momentous today as walking on the moon, I know the steps I take can carry great significance when I walk with you. In these moments, help me pause, give thanks, and remember that you are with me always, and for that reason, I must live my life to point others to you. I lift this prayer in Jesus’ name. Amen.

One thought on “Communion”